Heesen is delighted to announce that Project Falcon, YN19360, was launched at the shipyard on July 22nd, 2021.

• Interior design by Sinot Yacht and Architecture Design
• Glass elevator through all decks
• Touch-and-go helipad for private use only, with reception area

“This very large and complex project was both a challenge and an inspiration.” Commented shipyard CEO Arthur Brouwer. “The market is pushing towards increasingly large and voluminous yachts, and we are ready to meet that demand.”

Project Falcon‘s clean and chiselled exterior lines are by Omega Architects, who have introduced an eye-catching ‘bird‘s wing‘ motif as a visual enhancement to integrate the main deck, bridge and sundeck without interrupting the horizontal sweep of the windows. The result is a strong and muscular profile, while floor-to-ceiling glass coupled with lowered bulwarks ensure panoramic views and plenty of natural light to bathe the vast interior.

Lighting plays a prominent role in the design of Project Falcon, underlining and emphasising the architecture of the yacht. A magnificent suite of underwater lights will produce a splendid glow around the boat at night.

Sinot Yacht and Architecture Design penned Project Falcon‘s elegant and intricate interior. The complexity of the project presented a challenge to Heesen‘s engineering team and craftspeople, who have realised one of the most elaborate and sophisticated designs in the shipyard’s history.

“Each detail was crafted to meet the highest standards of sophistication and opulence,” explained Paul Costerus of Sinot. “The Sinot ethos for distinctive aesthetics is seen in the use of rare woods and veneers, fine fabrics, exquisite leathers, and bespoke metal and glass, as well as custom-built furniture and lighting.”

Sinot and Omega worked together to create an interior and exterior that complement each other, with a fluid and uninterrupted indoor-outdoor connection. Separate routing throughout the yacht ensures that her fifteen crew and four staff will be able to go about their work seamlessly and discreetly. Service is at the core of Project Falcon, with twelve guests accommodated in six staterooms and the owner‘s private apartment on the bridge deck aft.

The owner’s team and Heesen’s engineers came up with several ingenious ideas, including a reception area on the sundeck to welcome guests arriving by helicopter. “Heesen‘s design and engineering teams enjoyed working with our client‘s people on Project Falcon,” said Rick van de Wetering, the shipyard‘s COO. “This has been an immensely complex but satisfying project, which has given rise to some very creative solutions.”

The top of the elevator housing is designed to be easily dismantled to reduce air draft. Project Falcon also sports two garages for tenders and toys: one forward with gull-wing doors and one in the stern with a shower and day head.

Powered by two MTU 12V4000 M65L diesel engines and equipped with full tropical air-conditioning, Project Falcon will reach a top speed of 17.5 knots, with a range of 4,200 nautical miles at 13 knots. Thanks to her Fast Displacement Hull Form, she will be highly efficient as well as seaworthy.

The yacht will now remain at Heesen for commissioning before moving to Rotterdam, where she will then proceed for trials and tests in the North Sea ahead of delivery in December. 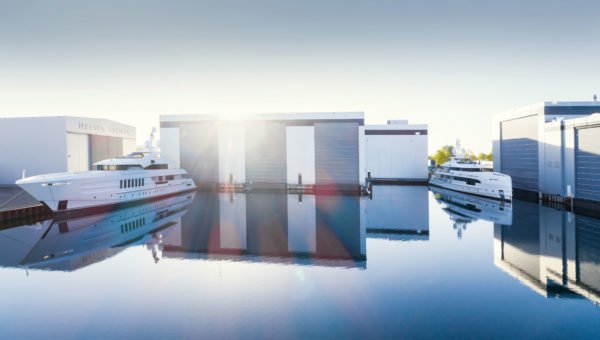 Heesen Yachts announces that, as of yesterday, the ownership of its company is once again 100% Dutch. Thanks to this transaction, whereby the shares in Heesen have been transferred to an independent Dutch Foundation, the employment both in Oss and Winterswijk is fully preserved. The Board of the... Learn more 21 Mar 2022