Heesen is delighted to announce the next major step in the construction of the 60-metre, all-aluminium Project Skyfall, YN 19959.

In a complex operation over several days in September, three large mobile cranes lowered the main engines onto their mounts, and then hoisted the superstructure into place over the waiting hull. An exercise involving meticulous planning and precision engineering, it all went without a hitch. Project SkyFall will now remain in shed number nine for outfitting until Spring 2023, when she will leave the harbour of Oss for intensive trials in the North Sea.

This high-speed vessel is a sport fisherman in yacht disguise, complete with cockpit, fighting chair and storage for 40 rods. Frank Laupman of Omega Architects created a striking exterior design to complement its Fast Displacement Hull Form, which is optimised for performance and efficiency, with gyro stabilisers and interceptor trim plates to maintain the correct running angle under way.

SkyFall will reach an extraordinary top speed of 37 knots in light load conditions, thanks to the 22,000 horsepower produced by four MTU 20V4000 engines driving four Kongsberg S90 water jets.
When complete in 2023, Heesen’s most powerful yacht to date will be accompanied by a custom tender, built by Vanquish to a Guido de Groot design that will mirror the mother ship down to the last brushstroke. The yacht’s muscular shapes are crafted to produce strong architectural shadows, while Laupman has underscored the sport fishing image with an aggressive, high-contrast paint scheme. Deeply tinted windows, a black superstructure band and hardtop, and red-orange accent stripes will all be expressive Skyfall’s immense power and speed.

Skyfall’s owner wanted something out of the ordinary, but not too drastic. He chose ‘Desert Tan’, described by Awlgrip as “calming and low key, this is a subtle and luxurious shade. Yellowy in its base tone, it suggests a vast desert landscape where adventure beckons.”

Which will ensure that the 60-metre Project SkyFall will look stunning out in the deep blue ocean, where the giants roam! 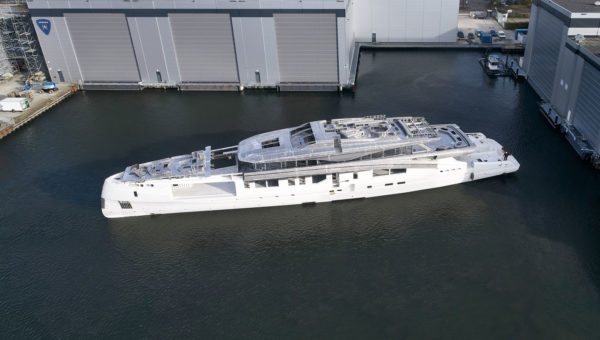 Heesen is delighted to confirm that the construction of YN 20067, Project Sparta, is proceeding on schedule. During a three-day operation that saw Sparta’s hull lowered into the water for the first time at the Talsma steel fabrication yard, powerful cranes were pre-positioned just along the canal... Learn more 26 Mar 2021 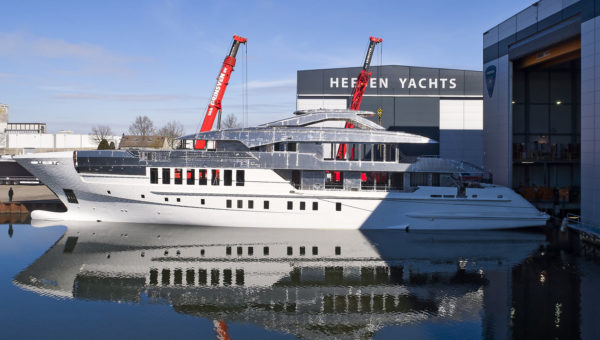 Heesen is delighted to confirm that the construction of YN 19755, Project Gemini, is on schedule for delivery in October 2022. The latest in the shipyard’s 55m Steel class will be available in time for the winter season in the Caribbean. Last week we installed the twin MTU 8V 4000 M63 IMO... Learn more