At 67 metres with an internal volume of approximately 1,200 gross tons, Project Sparta is Heesen’s largest steel-hulled displacement motor yacht to date. In the fourth episode of Heesen’s YachtTalk Specials, host Charlotte Kan heads to Barnes in London to catch up with Winch Design duo Jim Dixon, Director of Yachts and James Russell, Associate, Yacht Exteriors. They reveal how Sparta’s sleek exterior lines immediately impressed her owner when the concept was first unveiled at the Monaco Yacht Show in 2018.

Sculpture on the sea
Project Sparta is the latest in a long line of collaborations between Heesen and Winch Design, but it’s also one of the most complex designs. Sparta began life as yacht concept Avanti, aside from a few personalised touches, the high-performance sporty design remains true to the original drawings penned by Russell.

“Project Sparta is alive,” says Dixon. “It’s a very lithe and athletic looking boat. It’s a sculpture on the sea and will look very nice on the water. I think one of the factors that attracted the owner from the beginning was how immediately recognisable the design is, and the emotional connection that resulted from that.”

Russell, part of the Yacht Exteriors team at Winch, describes how Heesen requested a yacht concept that would retain the Heesen DNA with a low profile, sporty and elegant lines: “We spent time developing concepts together with Mark Cavendish in 2017, and the Avanti concept was born out of that collaboration. We then took that forward to a fully complete, advanced concept which was released at Monaco in 2018. And the end result of all that work is Project Sparta.

The lifestyle factor
A central theme to Project Sparta’s design is how it centres around the lifestyle of the owners and their family. “It’s very much a family boat with the interior and exterior oriented around their lifestyle,” explains Dixon. “A key signature is the transom beach, which is low to the water and perfect for enjoying life in and next to the sea.”

Inside, the general arrangement has two separate owner’s suites contained on a private owner’s deck, while two VIP cabins forward on the main deck are dedicated to the children.

“We’ve included a sliding partition that separates the two cabins from each other, but when drawn back also allows for a huge play area,” adds Dixon.

“Sparta has been specially designed with the owners in mind, and this has resulted in some interesting elements,” he says. “The lower deck, which is typically reserved for guest cabins, is fully occupied by an onboard spa, with a steam room, sauna, Jacuzzi and gym. It’s a very nice feature indeed.”

Choosing to have the spa, gym and galley grouped together on the lower deck did create some technical obstacles, he adds. “All the pipe work and electrical routings that lead out of the engine room need to pass through this guest-oriented area. So, that was a challenging hurdle for the engineering department to navigate.”

Another unique feature is Sparta’s inverted bow. During tank testing, discussions were had about whether to add a spray rail to mitigate any water spray when the yacht is underway. “It turned out that with a spray rail, water actually travelled further, reaching as far as the wheelhouse windows. So the decision was made to keep the bow design clean and minimal.”

Sparta is soon to celebrate the landmark joining of her hull and superstructure, due to take place in Oss later this year. She will be delivered to her owners mid-2023.

Nature inside and out
Russell highlights the main deck aft as one of the key features of the yacht: “Incorporating a flush swimming pool with a beach terrace, it affords unobstructed views from the back of the yacht.”

He also spotlights the second living area afforded on the sundeck and the raised pilothouse design, which helps to again achieve unobstructed views while maintaining a low and elegant profile.

An evolution of design is present in the interior, too, exemplified by the staircase that uses elements from fire and water. “The staircase will tell a story in carved timber as it runs down all three decks, so that will be a wonderful centrepiece when complete,” says Dixon.

Winch has elected to use a variety of materials sourced specifically for Sparta to complement the calm and softened colour scheme. “The aim is to inject elements of nature inside and out, such as the use of banana leaf in the dining room,” says Dixon.

Use Up/Down Arrow keys to increase or decrease volume.
The third episode of Heesen’s YachtTalk Specials transported us to the riverside design studio of London-based Harrison Eidsgaard. Co-founder Ben Harrison and director Richard Whitehouse walked host Charlotte Kan through an exclusive behind-the-scenes tour to share their thoughts, insights and inspiration for creating the ultimate yacht interior.

Developing ideas
Harrison Eisdgaard and Heesen first collaborated on 51-metre, full-custom Irisha, which was delivered in 2018. With both the interior and exterior designed by Harrison Eisdgaard, it was a gateway to future joint endeavours, including two new-build projects currently under construction at Heesen’s facilities in the Netherlands – 57-metre Akira and 60-metre SkyFall.

Akira is the first model in Heesen’s new 5700 Aluminium class and is built with a Fast Displacement Hull Form. “Unusually, Heesen approached us very early on in the process,” says Harrison. “The aim was to bring us in as interior designers earlier than normal to have the opportunity to develop the GA in collaboration with their engineering team. This has led to some interesting and positive developments in terms of how the boat is set out today.”

Some of Akira’s special features include a dedicated beach club area and an atrium staircase that allows for the incorporation of a lift in the central shaft. “The lift is quite a challenge from an engineering standpoint,” says Whitehouse, “but also keeps the aesthetic pleasing.”

Both elements echo the many evolving lifestyle preferences that owners have, such as enjoying indoor/outdoor spaces, watersports and fitness. Duality is another onboard theme where owners look to have a yacht that delivers an all-inclusive family experience with entertainment areas while simultaneously promoting privacy and seclusion. “It’s the ability to have the doors open while drifting from one place to another,” says Whitehouse.

Design in motion
Part of the design process today is creating more of a home, adds Harrison: “A yacht is not just somewhere to go to for a week’s holiday, it’s somewhere owners might live or work. We’re witnessing a lot of residential influences, with relaxed interiors that are reflective of their lifestyle and this outdoor way of living.”

The Harrison Eidsgaard studio descends from what Harrison describes as “the Bannenberg pyramid”, but when it comes to a recognisable design signature it sways toward the contemporary . “That’s partly reflective of our own preferences and personalities, however, part of our job as designers is to listen to the owner and their requirements, and the skill is in guiding them through the customised process and making them feel as though they have ownership of that design.”

Whitehouse supports this view, adding that there are many layers to design. “The primary elements are when embellishments can be made and detailed touches that illustrate a flair for design can be introduced.” A good example of this is the credenza aboard Akira. “The secondary elements,” continues Whitehouse, “such as wall panelling, exist in the background and form the foundations of an idea, and it’s how you marry the two that dictates a design’s success.”

Build in progress
Akira is scheduled to be delivered in 2024. The interior styling is virtually complete, though the technical drawing package is still in development. The next stage is for the design drawings to be transferred into working construction drawings ready for production.

“Another important part, which is where we’re at right now, is the development with Heesen and their outfitters on the choice of materials,” says Harrison. “We have to go through the process of refining all the woods to be featured on board, for example, making the physical samples, testing them, and readdressing all our fabrics to ensure they sit together harmoniously. This is required to give a definitive specification for all interior finishes.”

Some of the finishes being used on board include ombré – the blending of one colour hue to another – and specialised plaster finishes.

Making history with tomorrow in mind
Tom-Erik Buis, Technical Sales Engineer at Heesen, joined the conversation by video link to discuss developments on Akira’s build. He highlighted the yacht’s ability to carry recognisable Heesen DNA – fast, lightweight, with large windows, quality construction and sleek styling – while being the first in a new future-proofed class.

“The most challenging aspect of the project is combining a shallow draft with high speed and still being able to create a rigid and solid construction in aluminium,” he says.

Pressing question
In the previous episode of YachtTalk Specials, Ben Harrison of Harrison Eidsgaard asked Dixon and Russell the following question: “In today’s age, what do you find the most challenging aspect of the yacht design process?”

Dixon replies: “I think the challenge is the same now as it was when we used to draw things by hand, and that is gaining the trust of the client. As everything is done today using computer renderings, it’s so realistic that we’re not expecting the client to really use their imagination as they needed to do when presented with pencil-drawn visuals. But I think we manage to gain their trust very well.”

The next instalment of YachtTalk Specials will be at the British brokerage house Fraser Yachts and see Charlotte Kan in conversation with sales broker Andrew Bond.

When invited to ask Bond one pressing question, Dixon responded: “Fraser and Heesen have enjoyed a long and productive relationship together. What do you think Fraser buyers would expect now from Heesen and its future collaborators?” 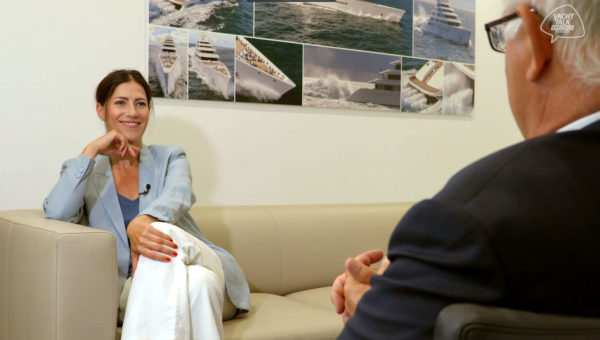 The second instalment of Heesen’s YachtTalk Specials took place in St James, the heart of London’s competitive yacht brokerage sector, where we caught up with Jonathan “Joff” Beckett of Burgess to learn more about the current superyacht market. He shared his insights on short-term trends... Learn more