Over its 40-year history, we have developed a reputation for building cutting-edge superyachts that have pushed boundaries in design, speed and efficiency. From record-breakers such as Octopussy to more recent innovators such as Galactica Star, Galactica Supernova and Home, Heesen’s facility in Oss continues to play host to remarkable superyacht projects.

The latest project to draw on this extraordinary heritage is Project Cosmos, an 80.07 metre aluminium superyacht that is set to push the boundaries even further. With a designed top speed close to 30 knots and an efficient cruising speed in excess of 20 knots, Cosmos will use a development of the Fast Displacement Hull Form (FDHF) coupled with innovative construction and advanced propulsion solutions to set new standards for large aluminium yachts. Although the keel-laying ceremony is due to take place later this year in May, this is not the start of the project – indeed, an extraordinary amount of design and testing has already been undertaken and completed.

The proof-of-concept and testing process has comprised several stages, starting with the base naval architecture of the vessel and its hull form, progressing through extensive computational fluid dynamics (CFD) work and physical tank testing of a scale model, and culminating with the design of the propellers and rudder system. For these aspects, Heesen has drawn not only on the expertise of its in-house design and engineering department but also that of long-standing partners Van Oossanen Naval Architects, and propulsion specialists at Rolls-Royce.

The first stage was to develop the FDHF concept and ensure not only that Cosmos benefitted from the efficiency and speed gains of the design, but also that the yacht could retain inherent stiffness – a challenge because Cosmos features all-aluminium construction in order to achieve the client’s desired maximum speed of close to 30 knots. The solution was for Heesen to develop the Backbone® – a method of construction that could deliver the required stiffness in the yacht without adding weight that would have impacted on the yacht’s performance. Such has been the success of the design that the Backbone® has now been patented.

A 3.7m scale segmented model of the yacht was built to use in physical tank tests at the Wolfson Unit in Southampton. After initial data on hydrodynamics, resistance and speed had been gathered, the model has been radio-controlled and self-propelled in order to measure the various bending forces acting within the hull and to prove the Backbone® concept. That provided valuable data for fine-tuning the structural design and to further optimise the construction method.

For such a large aluminium yacht, it is particularly important to know the real forces created by the sea on the hull, not just to meet Lloyd’s Register requirements but to exceed those and construct the boat to the highest loads that could be encountered.

Using the FDHF design and the Backbone® for such a large aluminium yacht requires a slightly deeper keel depth, but this actually brings further benefits. Due to the slightly increased draft Project Cosmos has a very low block coefficient, which means that the underwater body is very slim with nice verticals in the aft ship area, for an optimal flow of water towards the propellers. This results not only in improved performance but also in higher efficiency, ensuring fast cruising with comparatively low fuel consumption.

Rolls-Royce engineers started by gathering CFD information of the water flow towards the propeller. Then the design process began with Rolls-Royce proprietary software: different iterations of propeller and rudder design were tried before arriving at the optimal solution, which was then tested in physical experiments.

By creating a 1:11 scale model of the Promas rudder and propeller in the test tank facilities of the Rolls-Royce Hydrodynamic Research Centre (HRC) in Kristinehamn, Sweden, the propeller design was fine-tuned not only to ensure the speed and efficiency requirements are met, but also that any potential problems with cavitation can be eliminated. Cavitation is essentially where air bubbles form in the flow of water around and behind the propeller. It is particularly challenging at high speed, and as well as affecting performance it can also have severe impacts on noise and vibration – a critical consideration for any superyacht project, especially for one close to 30 knots! Cavitation issues were identified and eliminated by adjusting the rudder design. Finally, the tests proved that the propeller performed above expectations.

Project Cosmos will feature variable pitch propellers that will enable the yacht to handle both impressive cruising speeds in excess of 20 knots, as well as reaching a maximum speed close to 30 knots – a considerable achievement for an 80-metre superyacht. With the hull design optimised, the construction engineering finalised and the propulsion system going through the last stages of testing, Cosmos is already proving a milestone project for Heesen and the teams involved.

“Project Cosmos is raising the bar once again not only for Heesen, but for custom aluminium yacht building in general,” says Arthur Brouwer, CEO of Heesen. “Both from a technical standpoint and from a performance point of view we are pushing boundaries. Not only has this 80.07m project been designed to reach close to 30 knots, she has been designed for fast, 20+ knots cruising in an efficient manner. The solutions we have implemented to meet all these requirements are once again driving superyachting forward – just as Heesen has done with innovative and ground-breaking projects throughout its 40-year history.” 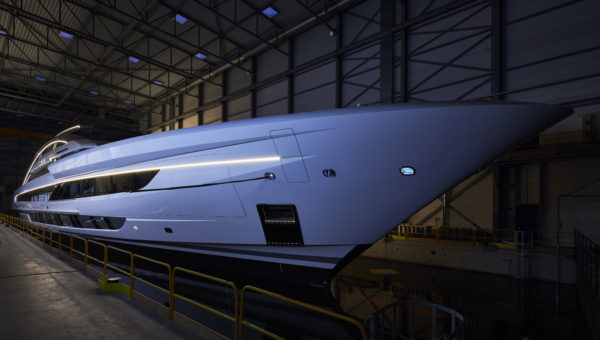 Heesen is delighted to announce that on November 19, 2021, YN 19480, Project Cosmos was launched at the shipyard in Oss. When christened she will be named Galactica. At 80 metres, with a gross tonnage of 1,700GT and a top speed of almost 30 knots, she is the biggest and fastest all-aluminium yacht... Learn more 16 Jul 2020

The hull and superstructure of 80-metre Project Cosmos... 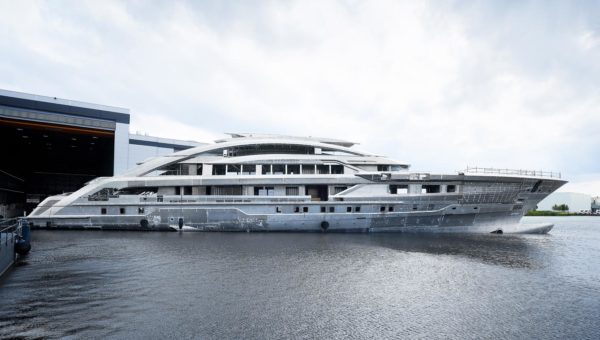 Heesen’s reputation as one of the most high-tech and high-quality superyacht builders in existence has been confirmed once again. Another step forward in the construction of the 80-metre Project Cosmos, its biggest challenge to date, has taken place at the shipyard in Oss. Light, long, fast and... Learn more